I am clearly in strong support of outgrowing fossil fuel use and abuse, but strategies which are built atop faulty premises are more likely to backfire in the long term and/or solve the wrong parts of our problems. And without mutual respect, we also easily fail to find unifying solutions.

How would one prove the theory of man-made catastrophic climate change with high certainty?

With things like tobacco, we have millions of smokers and billions of non-smokers to potentially study and compare, with plenty of room to replicate health experiments. But we only have one Earth experiencing this century once. We cannot test parallel universes’ Earths (“test tube Earths”) to setup repeated experiments isolating variables with different pollution levels, so we have to completely rely on models. 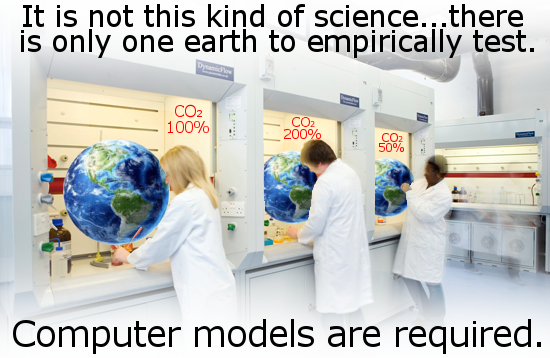 More informed climate skeptics totally agree with the principle of the greenhouse effect, and a relatively small amount of direct influence on the temperature by carbon and greenhouse gases (around +1oC/century).

Given this basic agreement on the greenhouse effect, this debate is not on human greenhouse gases increasing the temperature at all, which is technically all “anthropogenic global warming (AGW)” means. It is whether our impact is significant enough to create catastrophic side-effects on the climate, ecosystems, and/or civilization.

The heart of the entire climate crisis debate is really on the net impact of the thousands of different feedback effects, after man-made greenhouse gases are added (IPCC estimated net +3oC/century). Scientific skeptics tend to think Earth’s net feedbacks would actually dampen, not amplify our impact (maybe net +0.5oC/century).

Chaotic systems are by definition very sensitive to initial conditions (‘the climate’ is a coupled non-linear chaotic system), so the values of such key variables like carbon’s net amplification are extremely important and the core sources of skepticism. 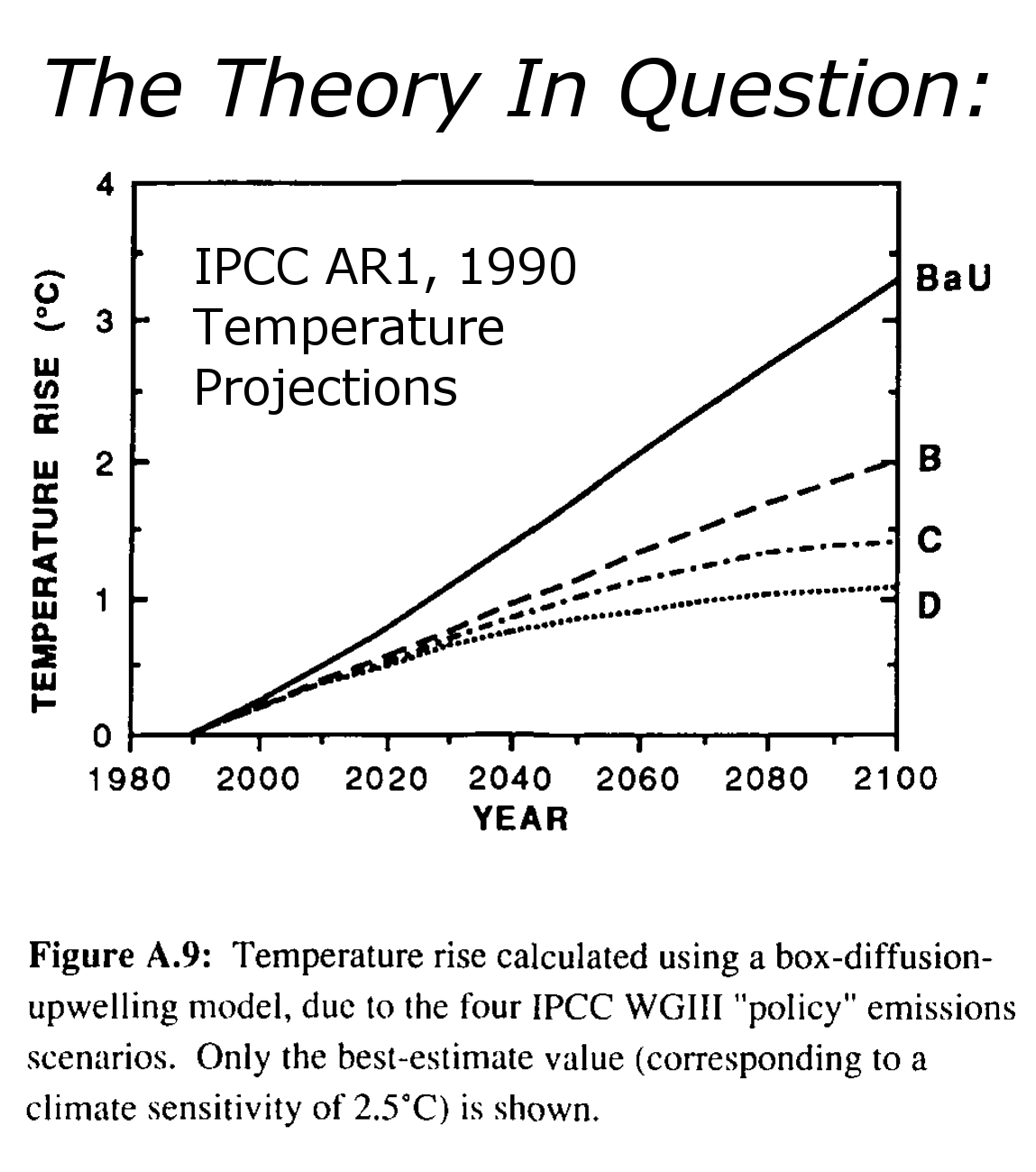 The best estimates of net amplification after adding extra greenhouse gases culminate and are expressed through computer models (simulations). These trend models must also fit past observational data (graph below) before being used for trend projections into the future. These temperature trend models are in fact the theory in question, far more so than any of the more basic scientific components upon which they are built.

When I discuss the AGW theory generally, I am discussing these temperature models’ alarming projections, not component science upon which they are built and which have more validating observations. The aggregation of stronger component science, plus all the unknowns. So maybe the more accurate acronym for the real debate should be CAGWM for ‘Catastrophic Anthropogenic Global Warming Models’.

As you will see below, the models have not dramatically changed in the past 25 years. The graph to the right is the theory’s first most formal IPCC projections from 1990 currently waiting 50-100 years to be validated or falsified, at which points observable data will either be a close match to projections or not. The solid top line is Business as Usual (BaU) and is the experiment we have been testing and measuring thus far.

We are maybe halfway through the first experiment/test of the CAGWM theory.

Let’s take a look at how well the models have done so far, starting with the most recent temperature observations by the Intergovernmental Panel on Climate Change (IPCC) (AR5, 2014): 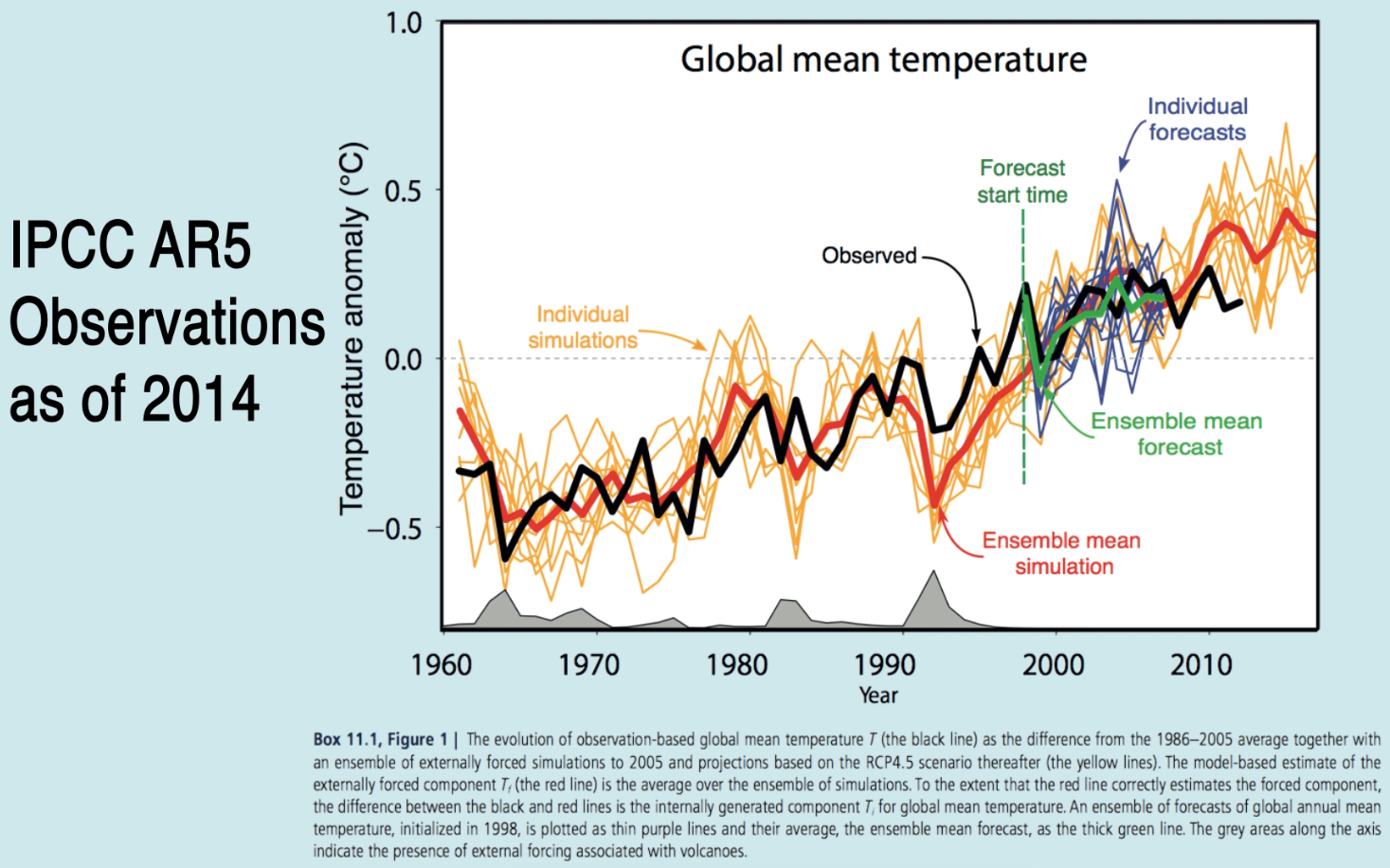 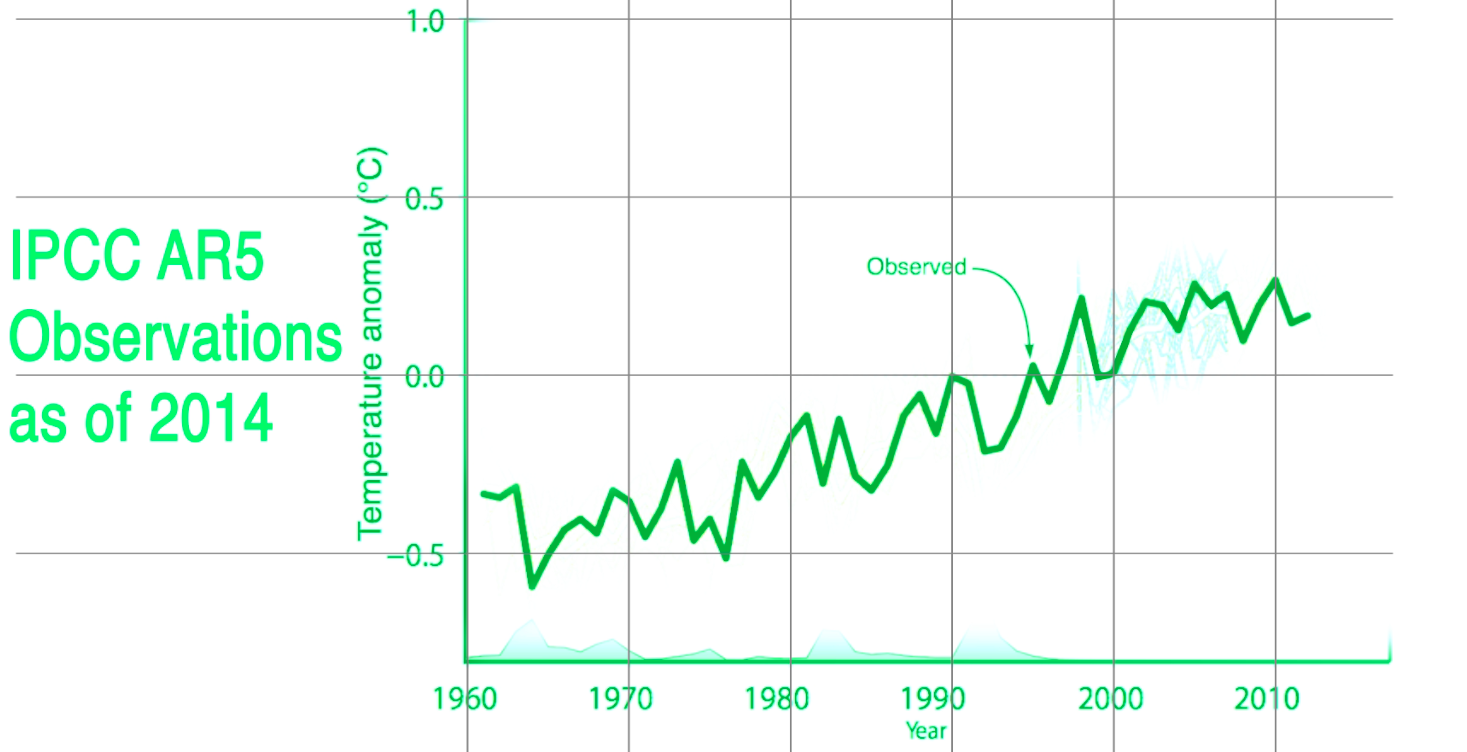 Next are the 2014 projections for future global temperatures from the IPCC’s recent Fifth Assessment Report (AR5), then the past temperature observations overlaid:

The next projections are from AR4 published in 2007, overlaid with the past temperatures observed in AR5 (2014), and the 2014 projections (greens): 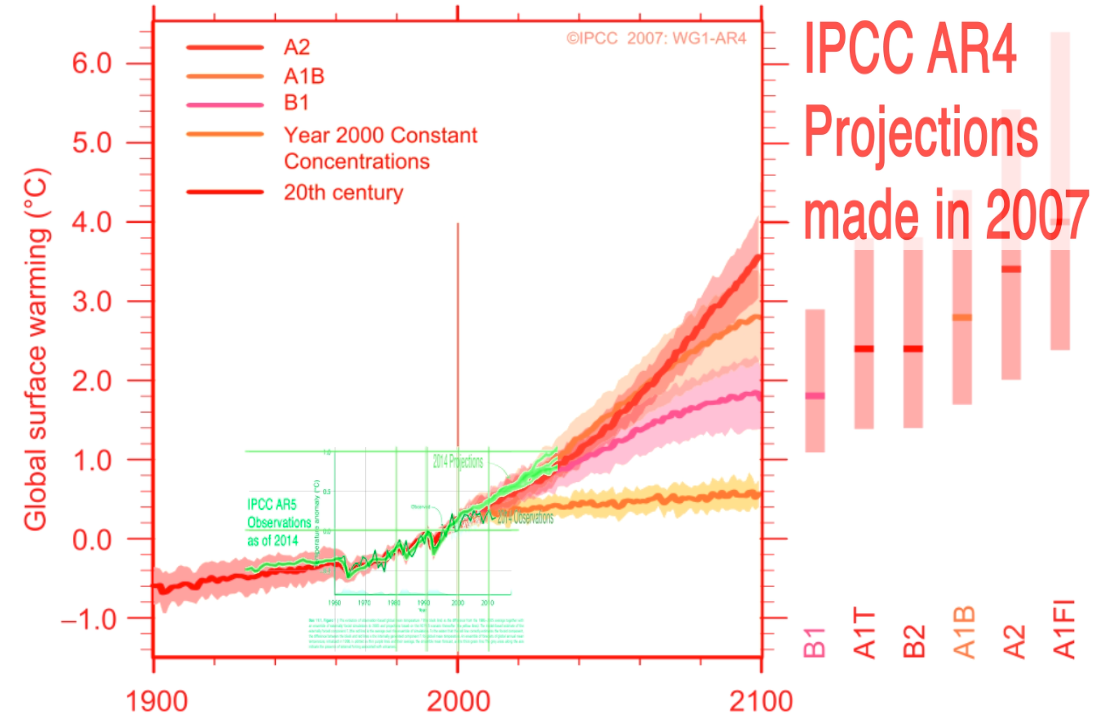 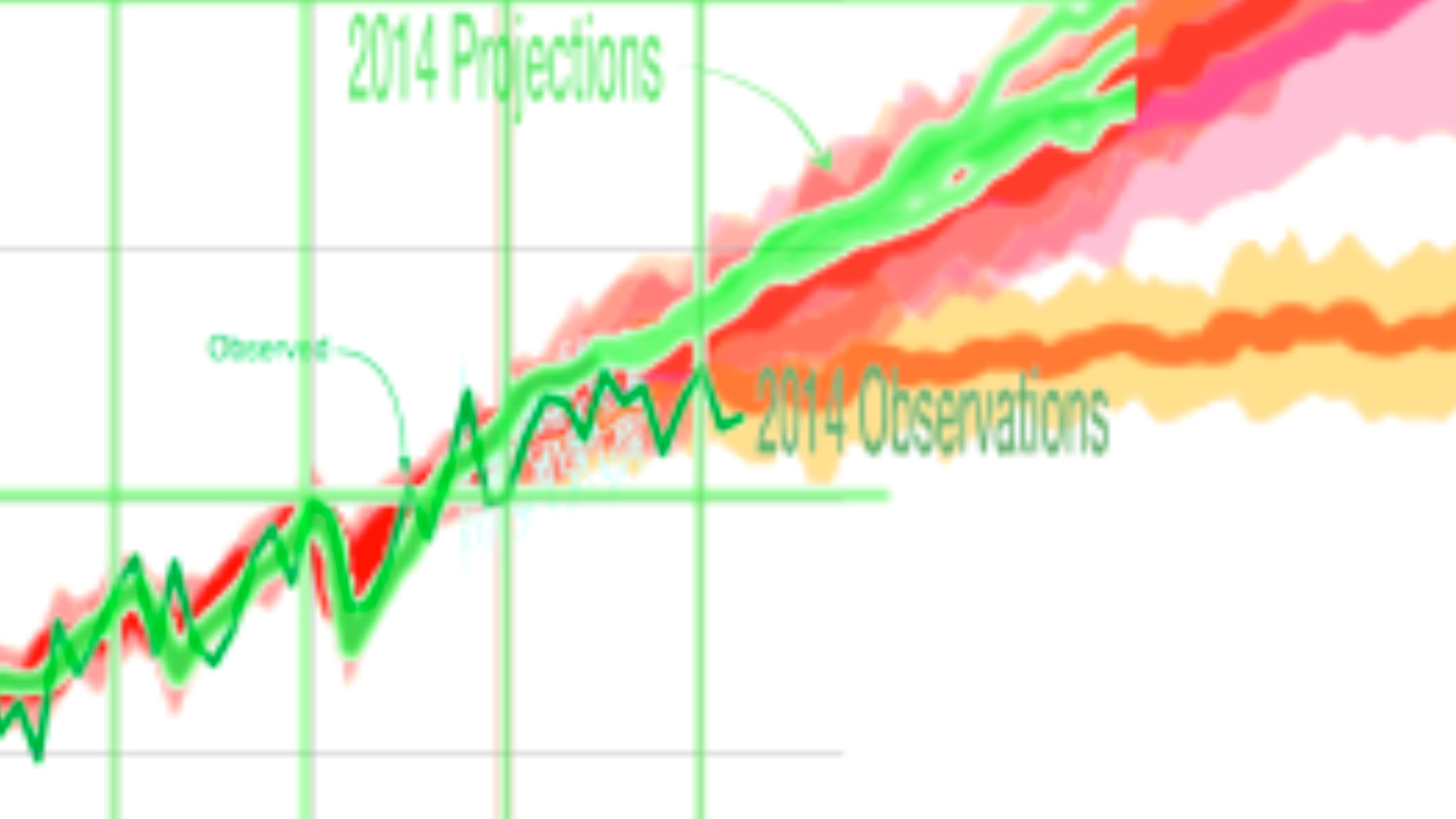 The next projections are from AR3 published in 2001, again overlaid with the same past temperatures observed and projected in AR5 (2014) (greens): 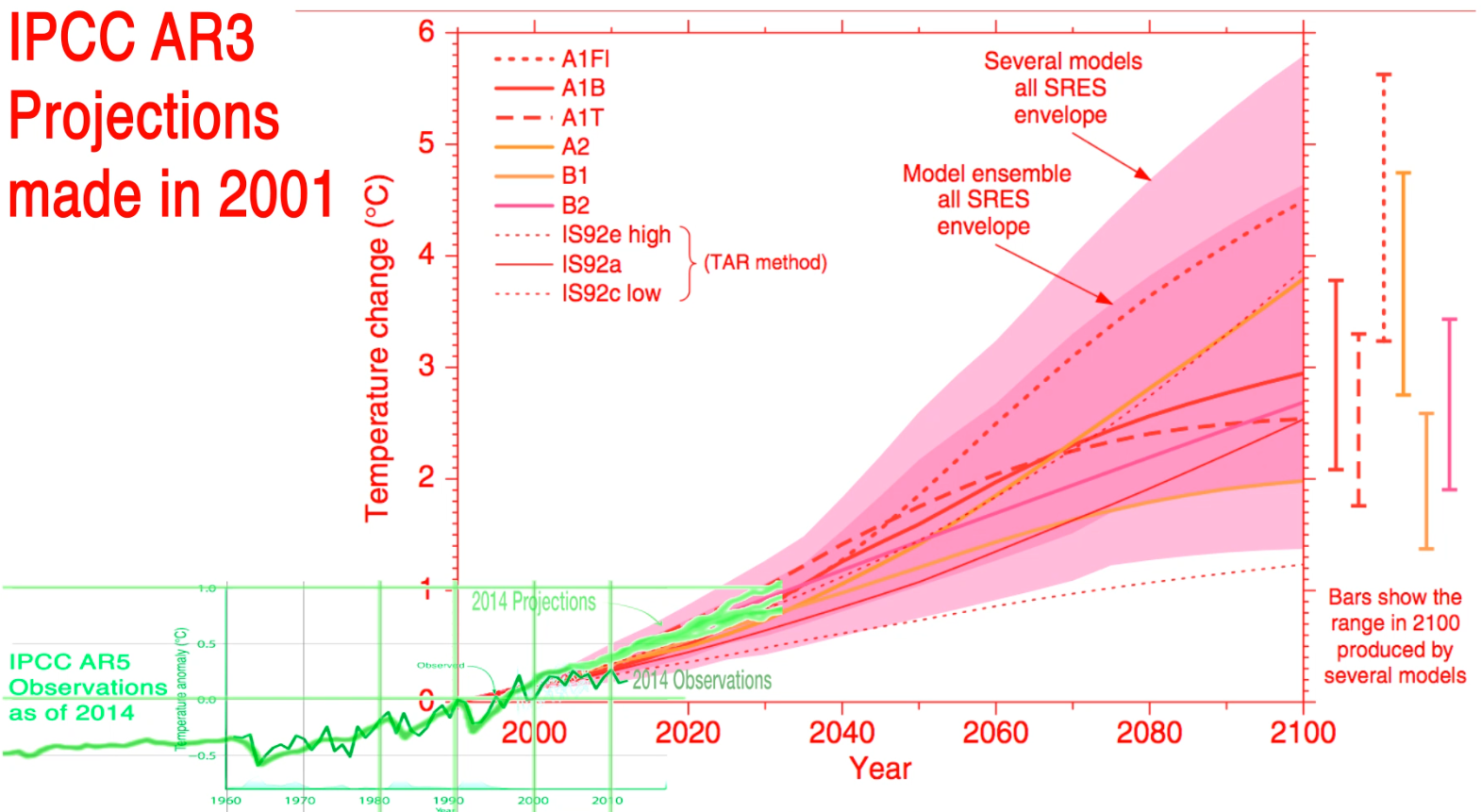 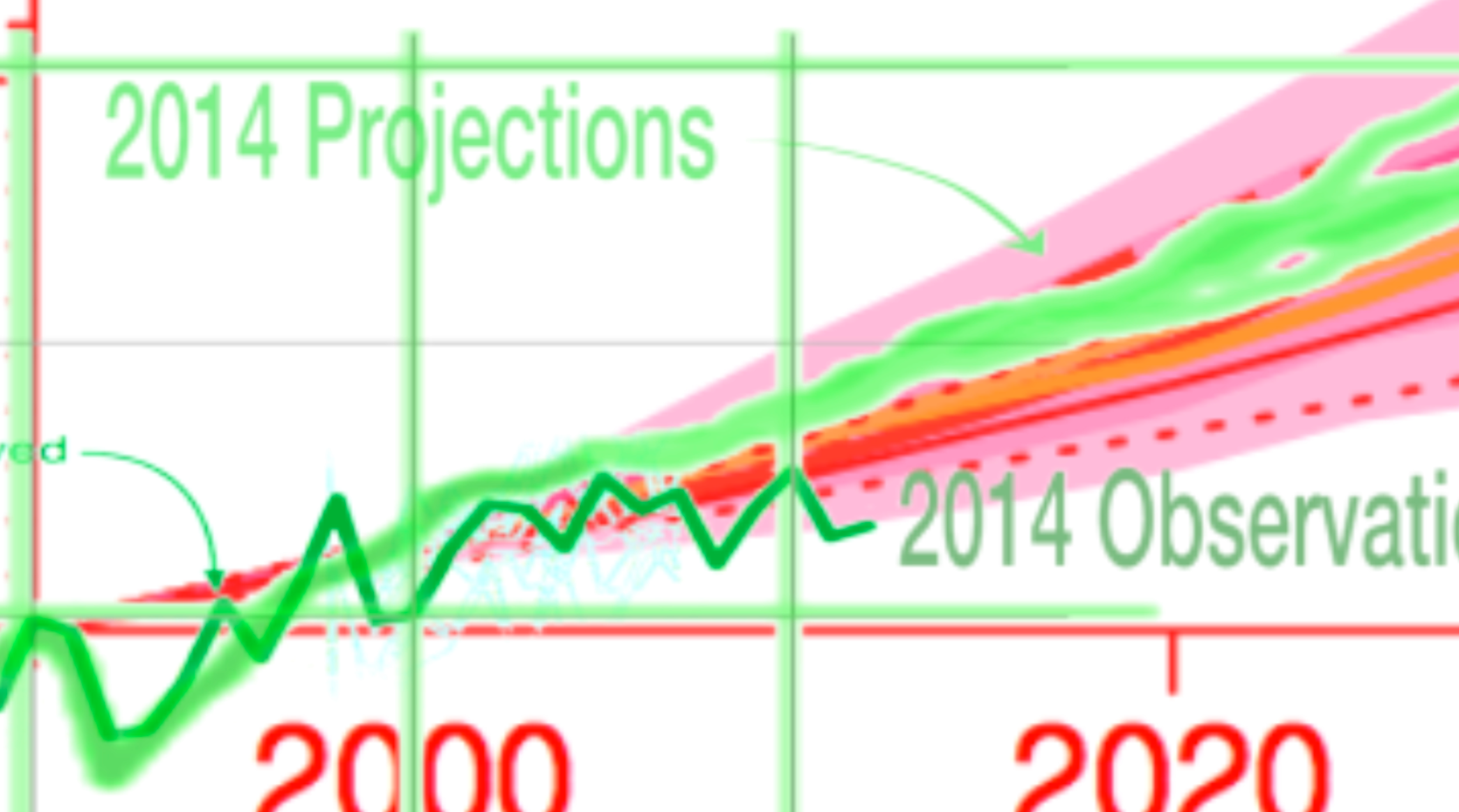 Finally, the first projections from the First Assessment Report (AR1) published in 1990 (red), the first experiment of the theory currently being tested, overlaid with the temperatures observed and projected (greens) in AR5 (2014): 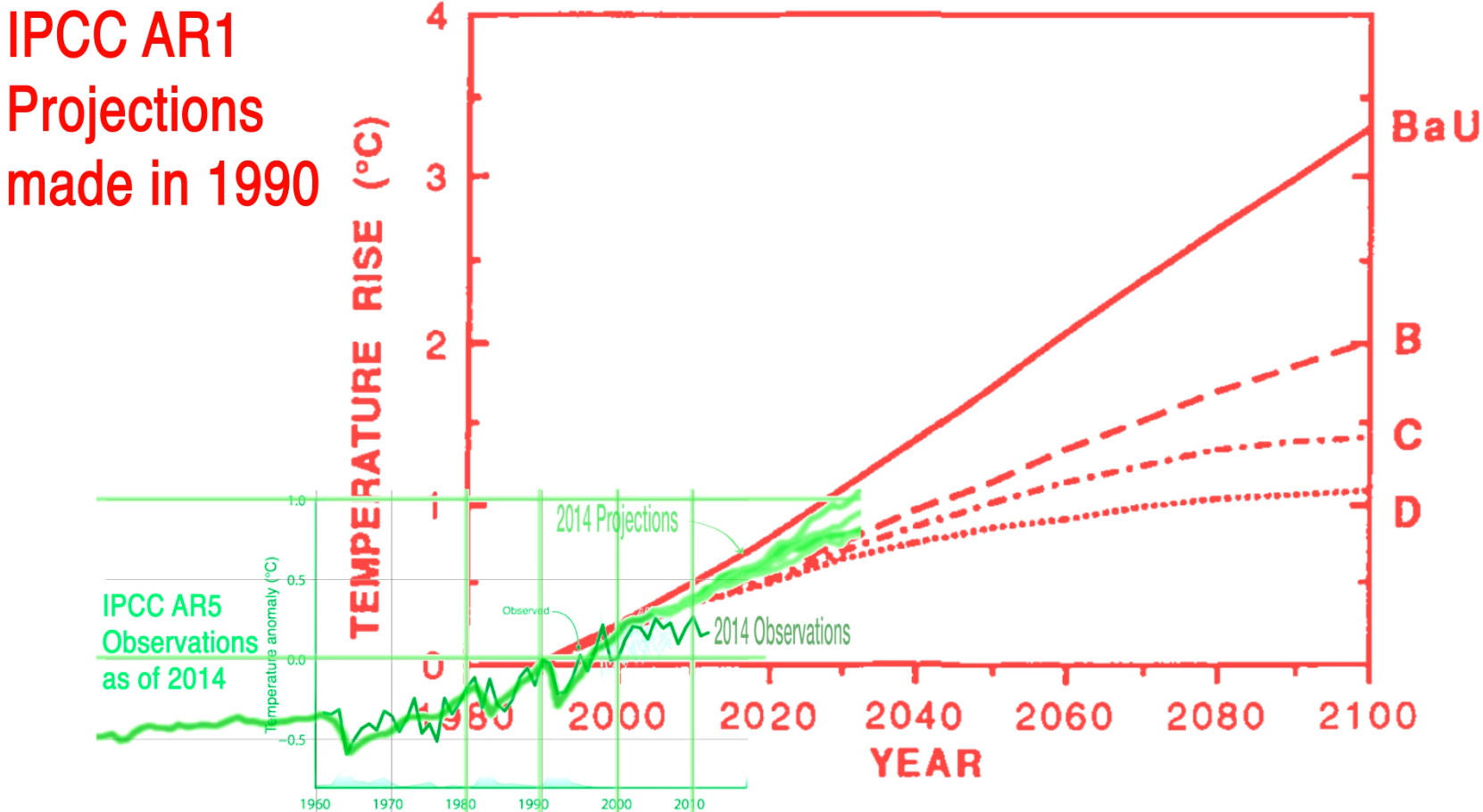 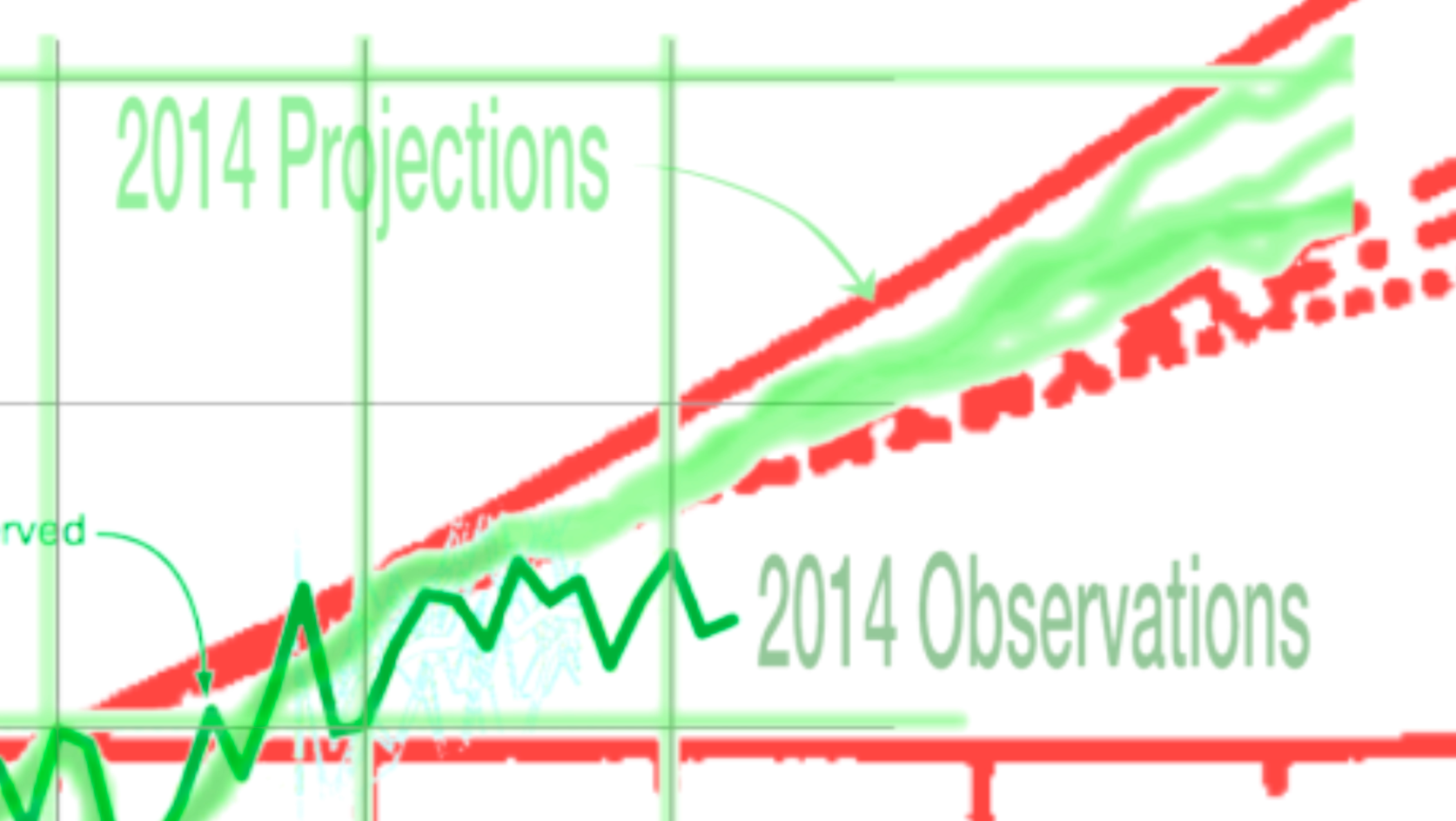 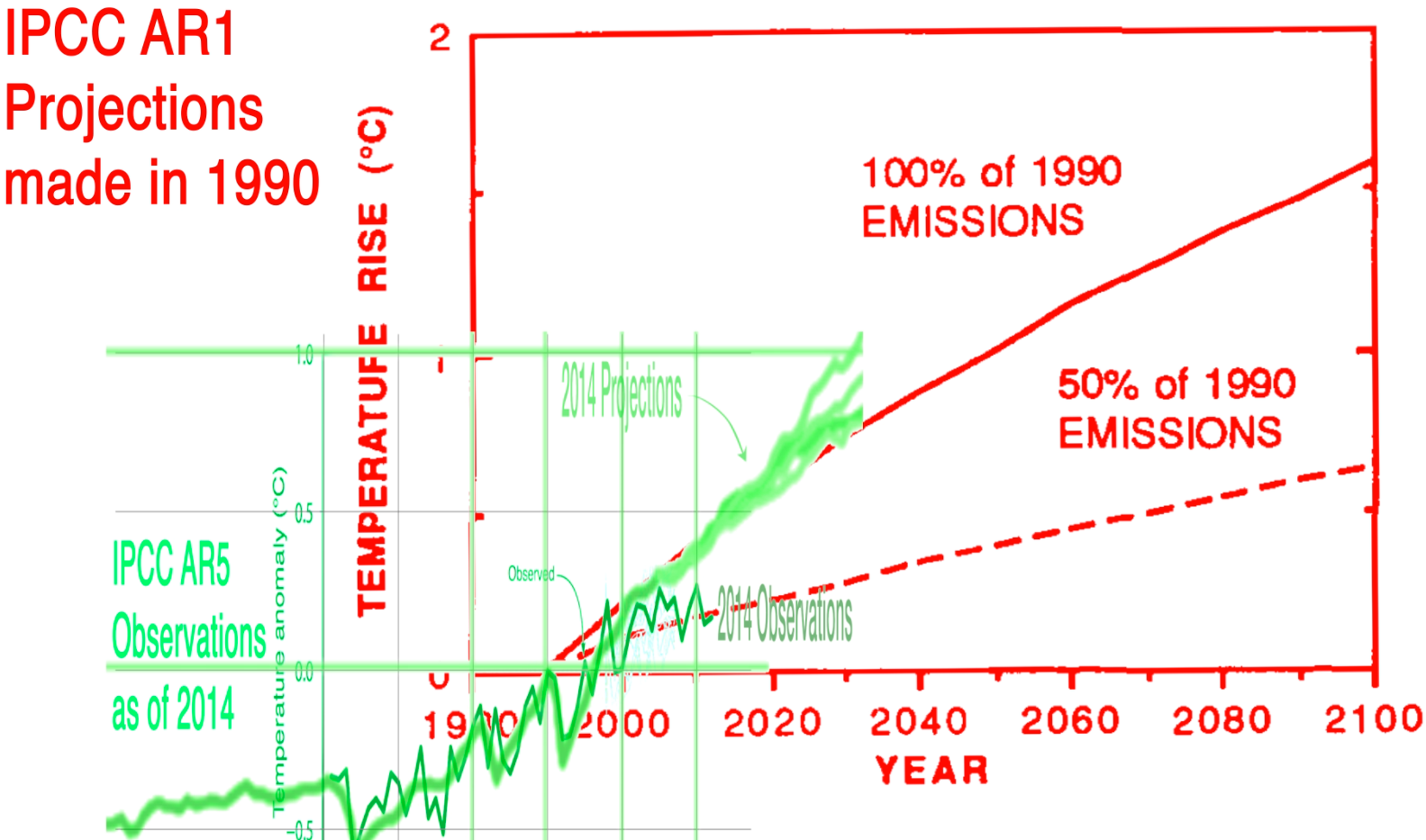 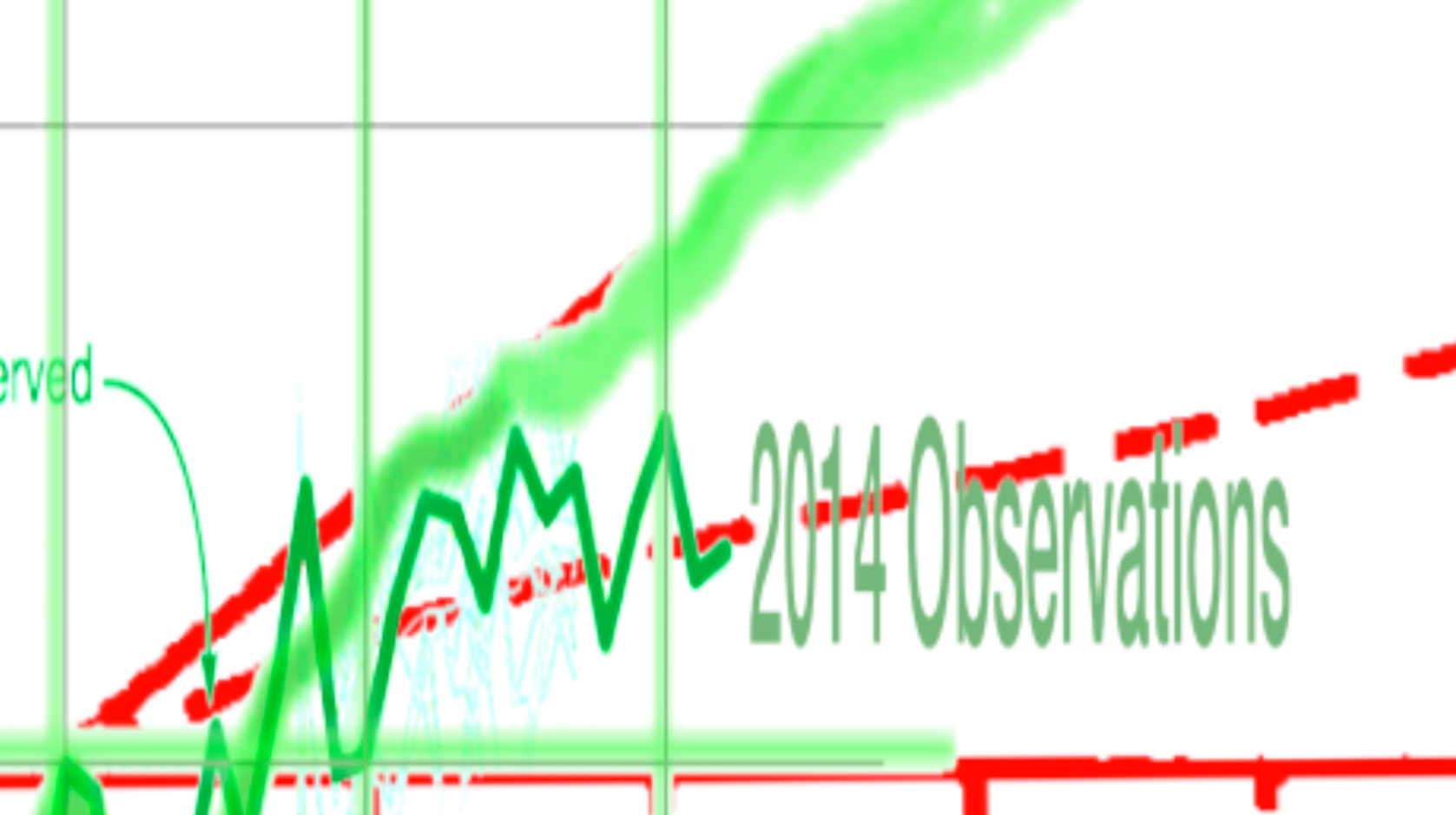 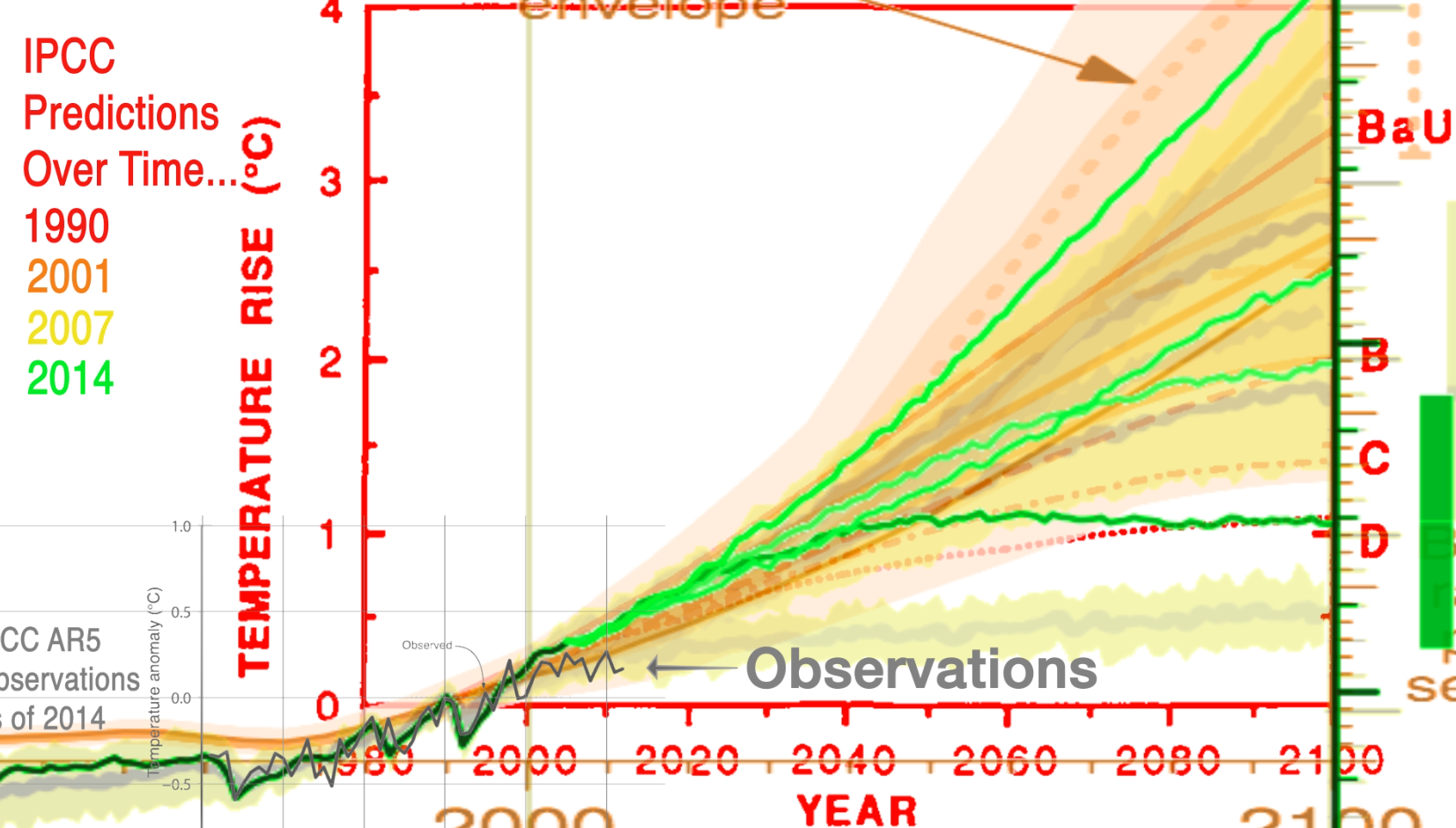 If anyone wants to test my work, you can easily replicate this graph experiment in GIMP/Photoshop using the IPCC reports. I used After Effects to try to document my full process.

95% certainty does not mean 95% accuracy. Every set of IPCC trend projections has over-estimated rises in global temperature thus far. Perhaps this is one reason why an increasing number of people think the seriousness of global warming is exaggerated. According to the 1990 AR1 predictions, we are now closer to having had achieving 50% reductions in 1990 greenhouse gas emissions, even though our net emissions have gone up.

The jury will still be considered out regarding the theory’s trend projections for another 25-75 years pending long-term observational data…no matter how much more we study related issues in the mean time. Until then, the burden of proof does really remain with the theory, not its skeptics, and the theory is surely not ‘settled’ without long-term data testing its hypothesis.

If ‘the data is in’, the ‘science is settled’, and the relevant time period of this experiment is only 25 years, then we could more confidently reject the theory than endorse it based on the data observed thus far.

{* Update: The observation data and/or the interpretation apparently changed in mid-2015: Science publishes new NOAA analysis: Data show no recent slowdown in global warming … followed by an FOIA lawsuit. This is discussed a bit more in my update, “Global Warming Hiatus Is On Pause“. *}

The IPCC acknowledges the difference between “climate models and the hiatus in global mean surface warming of the past 15 years” (WG1AR5, p.785).

But natural variability and other explanations of where the ‘missing heat’ may be hiding are factors which should have been reflected in more accurate mean global temperature models and comprehensive understandings. This level of accuracy at least seems necessary if these models are considered to have unquestionable certainty, authority, and are actionable tools for global policy decisions.

In this example of the 15 year warming hiatus, the IPCC mentions that 111 out of 114 simulation runs overshot the observed temperatures (97%).

It would show little-to-no bias if roughly half of the computer model runs predicted cooler temperatures than we have experienced, but this 97% means serious experimental bias and/or theoretical misunderstandings. Here I just mean ‘bias’ in the models’ estimated feedback amplifications, not personal bias of scientists.

The business as usual projections are averages of many simulations run by many different models, and theoretically represent roughly half of simulations being cooler than the line shown. So these trend lines should work well as a general test for bias, but this 97% number helps show just how far from the data we’ve gone.

The fact that many different models are merged for final projections raises another interesting point, albeit somewhat rhetorical, by UConn Professor Howard Hayden: “If the science were settled, there would be precisely one model, and it would be in agreement with measurements. Alternatively, one may ask which one of the twenty-some models settled the science so that all the rest could be discarded along with the research funds that have kept those models alive.”

Annually, there is an estimated 9 petagrams of human-contributed carbon in the carbon cycle, but there is also about 3 petagrams of carbon going to the “missing carbon sink(s).” I am a computer scientist, not a climate scientist, but there’s no way I would want to aspire for 95% certainty with unknown factors around one third the size of my most important input to a carbon cycle simulation.

The size of these known unknowns has fluctuated, but carbon is just one of the sensitive initial conditions, after which thousands of feedbacks have to be factored in to simulate something resembling reality. I would have no confidence in my models because we do not sufficiently understand enough of the component chaotic systems involved, nor how they aggregate.

Maybe it’s a collective ego-trip that makes us want to believe we can; hubris. And I’m sorry but without concrete data to prove this theory, like model projections confirmed by subsequent observations, it does require “belief.” Given that this theory cannot be adequately validated nor falsified for 25-75 more years, and the observations thus far do not support it, I would definitely not promote expanding global governance to abide by its predictions.

I would stop blanket ridiculing all “skeptics” on principle, and definitely stop using the dismissive and emotionally charged label “deniers.” This kind of attitude has greatly helped fuel some of our domestic renewable enemies between the divided and conquered left and right. Maybe with a more balanced and intellectually honest perspective we can start establishing common ground towards concrete solutions to both real and theoretical problems.

Finally, with a public debate centered on “man is changing the climate,” almost every piece of anecdotal evidence in our non-static world fits this criteria, significantly hurting its falsifiability. The goalposts may have moved from ‘global warming’ to ‘climate change’, but the increase in extreme weather events is still theoretically blamed on the gradual warming as the root cause. If the alarm is still on carbon and greenhouse gases, then the concerning effects must logically still be due to increased temperatures from the greenhouse effect.

So temperature increases closely matching the models’ projections are still required to provide evidence for both ‘global warming’ and ‘climate change.’ And changes in the climate alone provide no proof upstream to it’s parent theory of catastrophic anthropogenic global warming. Weather extremes do nothing to prove the theory without the observations matching projected increases in temperature.

Of course the climate is always changing, but it seems our best models still can’t predict it with anywhere near the certainty claimed in Summaries for Policymakers or media headlines. No matter what, we have to wait more decades to see if this theory is valid or useful.

So if you’re concerned about the environment, let’s stop spending any more money or decades trying to prove or debate it. Instead we can start buying big solar and launch its market like we should have 30 years ago.

These quick video provides excellent summaries of the key discrepancy details in models, the observational data, and the consensus. Especially if you have never heard some of my perspective described above, please trade 10 minutes for this rational side of skepticism you won’t find in the mainstream debate:

Geoengineering includes weather modification strategies which would apparently be MUCH cheaper solutions to alleged temperature rises than switching to things like solar.

On darker and more hypothetical nights, I entertain another thought experiment (not making any claims): Perhaps these carbon climate models are in fact very accurate, but framed as an urgent threat to national security, governments have secretly been spraying the alleged chemtrails for more than a decade…effectively creating lower temperatures than projected, and explaining ‘the hiatus’ we have observed.

Then again, maybe the models are wrong and the same events still happened, due to misunderstandings of causal relationships. Have fun playing with that thought.