I had trouble finding such a data set going back to the early nineties. So for the sake of longer-term estimates in this hypothesis, I am rounding years 1993-2005 to the 2006 estimate in the SEIA report. Below is what this looks like (below, right), with another U.S. solar generation chart for context (below, left). No one shooter killed the electric car, but this is the one hockey stick which should have begun decades earlier: [Chart 2]

I then converted these solar value estimates into 2014 dollars, like all dollar values used below. Data Spreadsheet

If there is already a consensus on man-made climate change and the science is settled, then shouldn’t spending far more directly go into existing solutions instead of continuing to study the problem and potential future solutions.

What if ALL Federal Climate Change Funding had gone directly into purchasing solar technologies?

What if this money was converted directly into U.S. solar installations instead of funding research, analysis, subsidies, energy efficiency, or financing.

In this hypothetical, the U.S. government would spend more like a straight-forward participant in the market, which for many on the right might be a more preferable role. It could start with its own infrastructure’s energy needs (which are actually tied to budgets far beyond just climate issues). The government could easily be the largest customer, dramatically increasing demand and single-handedly boosting the solar industry’s position in the U.S. and global markets.

Solar energy has wide public support, even though climate change theory has been one renewable source of passionate divide between the left and right, helping maintain mutual status as enemies.

Below are budget totals for “Federal Climate Change Funding” from the Congressional Research Service (in teal), next to the yearly total values of U.S. solar installations (in dark blue, SEIA data from above).

Until the past few years, the federal government has annually spent 2-4 times more on “climate change” issues than the entire size of the U.S. solar industry: [Chart 3] 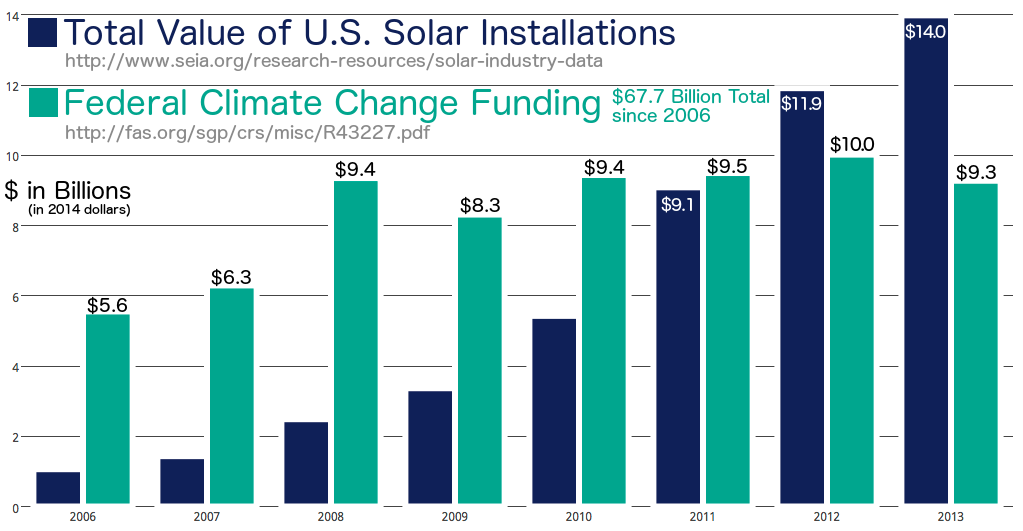 Next is the stacked graph in my hypothetical where these federal funds went to directly purchase solar installations. I think this shows that if we had implemented this strategy in 2006, the total value of U.S. solar installations would be about $67 billion larger in 2013, almost 6 times larger than our current solar capacity. Let us call this Scenario A: [Chart 4]

Now let us consider if this strategy had instead been implemented soon after the formation of the Intergovernmental Panel on Climate Change (IPCC) in 1988. I was able to find Federal Climate Change Funding data going back to 1993 (1993-2000, 2001-2013): [Chart 5]

I think this shows that if we had chosen this strategy in 1993, the total value of U.S. solar installations would have been about $132 billion larger in 2013, about 10 times larger than our current solar capacity. Let’s call this Scenario B: [Chart 6] 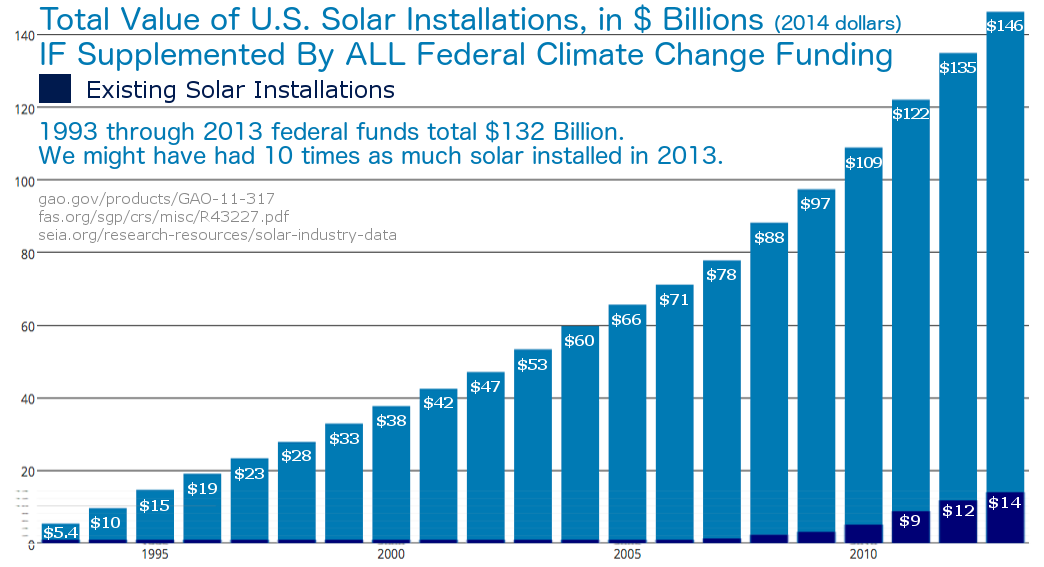 This could be interpreted as government already having collected $132 billion in taxes devoted to the greenhouse gas alarm since 1993, without a carbon tax or cap-and-trade scheme. The Federal Climate Change Funds from 1993 through 1996 alone total $17.7 billion (in 2014 dollars). So nearly 25% could be lost in bureaucracy, and we still could have accomplished our 2013 solar industry capacity by 1997, sliding the solar hockey stick 16 years earlier.

I also argue that the IPCC budgets would also be better used on directly purchasing solar, but that body amounts to much less than 1% of this federal funding (which does support a significant part of the scientific research the IPCC relies upon). This is why I have left the IPCC budget out of the above calculations, about $175 million since 1988 (2014 dollars).

Another huge scenario would be to look at the government subsidies for the different energy industries and redirect them to renewables only. Again I would prefer if the government just directly purchased and implemented renewable technologies, boosting their market share and lowering the price through more natural economic causality instead of providing subsidies.

Redirect Half of the Military Budget…

Maintaining access to low prices from oil reserves in the Persian Gulf is one of the single largest overt reasons for military expansion and presence in the Middle East. This simply MUST be factored as an externalized cost of “cheap” oil.

Spending big money to directly purchase solar technologies would increase our energy independence without the completely predictable blowback caused by [coalition] invasions, occupations, and covert operations lacking democratic oversight. I argue this would not be a foreign relations compromise, but in fact a more advantageous long-term strategy in the War of Terror.

It is more powerful to use sources of energy which are not dependent on geography.

My final hypothetical scenario considers if half of our defense budget since 1993 had gone directly to purchase solar technologies, much more dramatically skyrocketing the solar industry’s position in the market.

I think this shows that if we had chosen this military strategy in 1993, the total value of U.S. solar installations would have been closer to $5.8 trillion larger in 2013, about 416 times larger than our current solar capacity. Let us call this Scenario C: [Chart 7] 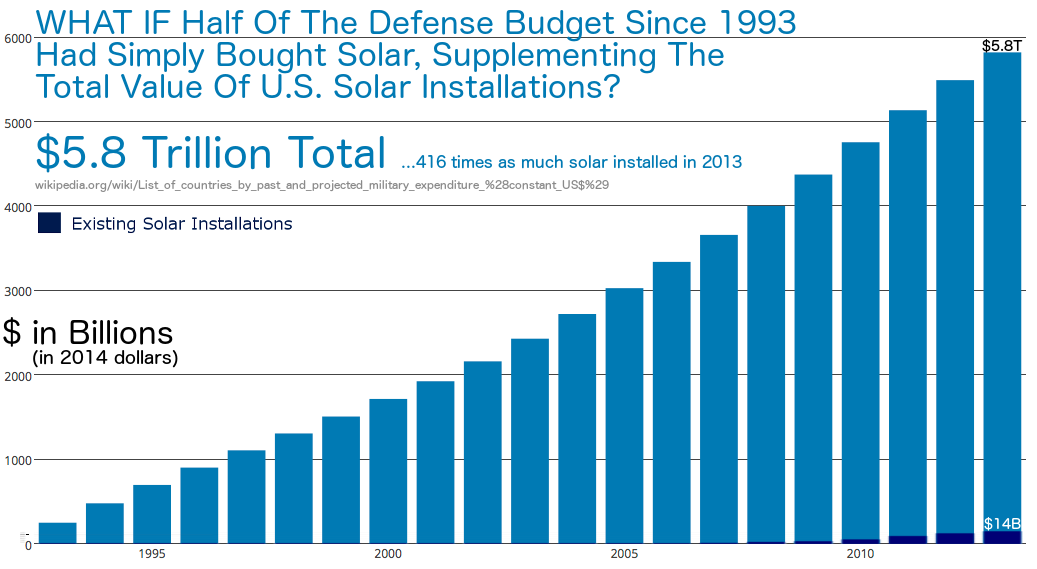 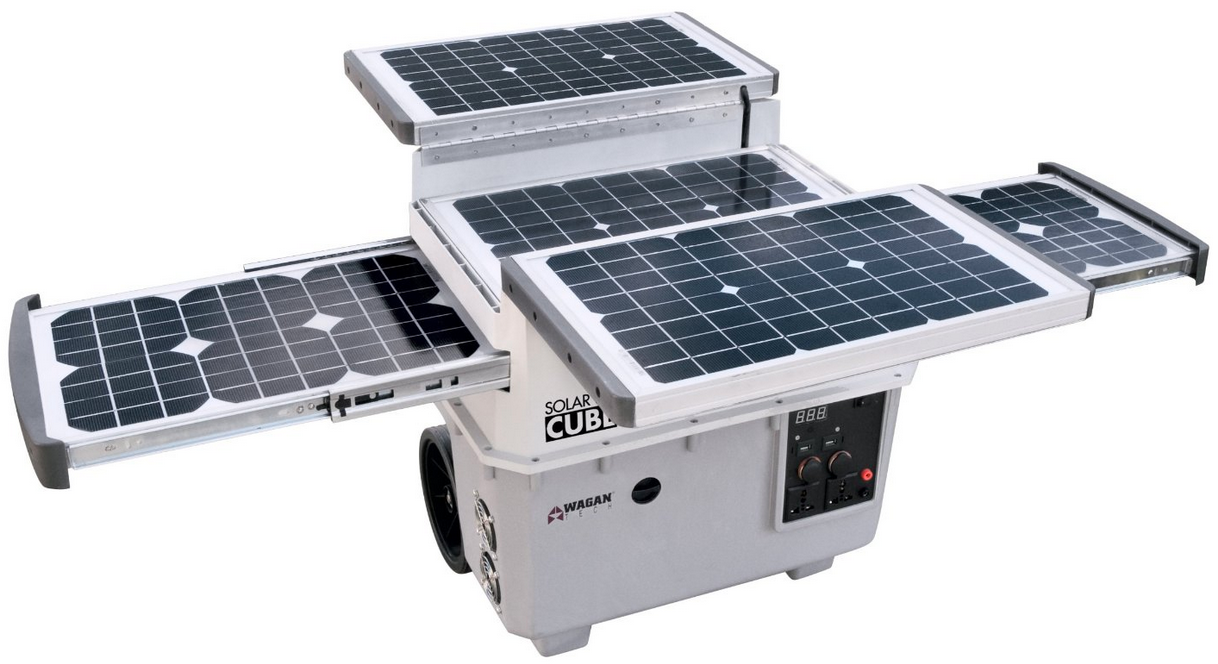 *I have no knowledge of, nor affiliation, nor conflict of interest with this manufacturer, nor any other.

Beyond independently satisfying ALL of our own energy needs, we could air drop things like portable solar cubes all over Africa, the Middle East, and other places without first world problems. Places where even access to basic lighting at night makes a huge difference.

I bet we could get a better bulk deal that might balance the shipping costs, but the $327 billion half of the 2013 defense budget could have directly Amazon Primed 327 million solar cubes generating 80 Watts each. Larger aid drones might have dropped these 26 GW of solar power instead of predators dropping bombs. Collateral empowerment only.

And of course, if we had been spending on big solar for twenty years, the price of photovoltaics would already be dramatically lower and the total hypothetical solar wattage dropped would be dramatically larger.

What These Scenarios Would Mean…

So my final question, is how these numbers would change if one of my three hypothetical strategies described above had been implemented. This table compares them to rough estimates of what the scenarios, and what 100% solar, might look like: [Table 1]

My rough estimates for Scenario C with half of the defense budget since 1993 theoretically gets us beyond 100% energy independence via solar by 2009. Then I guess we could donate the extra 41% to other countries…dropping solar not bombs.

And perhaps 100% solar might not be the best viable renewable recipe, but such hypotheticals must be a giant step in the right direction. I find it ridiculous that people argue that solar is too expensive to completely migrate towards. Maybe $4 trillion could get us to 100% solar: less than a decade of destructive defense budgets. So too expensive compared to what?

If we had perhaps started with the full climate change funding plus matching funds from the defense budget since 1993, then we might have 20 times more solar installed today.

If climate funding was matched 10-fold by defense since ’93, our country might be more than 1/3 powered by solar by now. Perhaps this 1:10 bipartisan concession might be a reasonable and politically viable starting point moving forward today.

The bureaucratic factor would always prevent 100% of such funds from buying solar, but I still consider all these projections conservative because they do not consider ANY positive feedback loops related to massive industry expansion.

A ten-fold increase in demand would have had some proportionally dramatic increases in completed research and development, further expanding the capabilities and potentials of the industry. Big government solar spending would have lowered prices much earlier, making solar more affordable for average homes to get us the rest of the way. 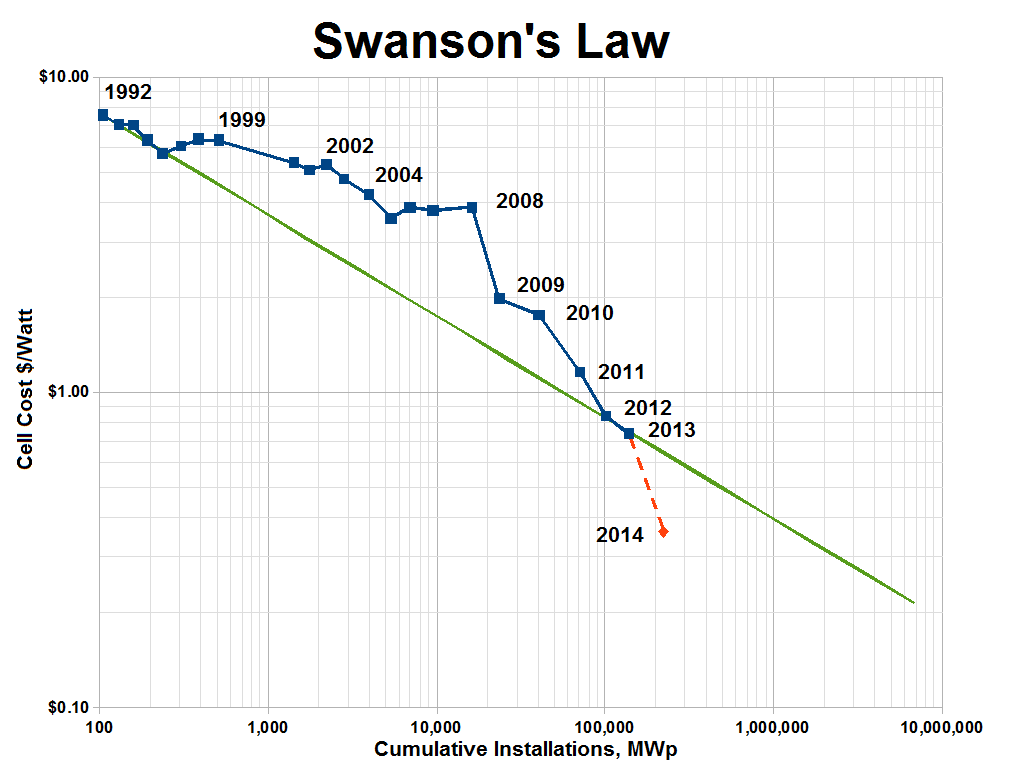 Swanson’s Law is an observation that the price of solar photovoltaic modules tends to drop 20 percent for every doubling of cumulative shipped volume. Since the price of solar is strongly correlated with cumulative installations (logarithmic graph on right, [Chart 8]), the timing of when my scenarios would reach 2013 levels of solar installations would also roughly be the timing of 2013 solar pricing.

It should also be noted that not all solar-based energy generation even uses photovoltaic panels. Concentrated solar thermal power (CSP) uses mirrors to focus a large area of sun light to heat materials at the center, which usually drives a steam turbine to then generate electricity.

This method stores most of its harvested energy in the form of heat (not massive arrays of batteries) which is then turned into electricity 24/7, not just while the sun shines. Whereas photovoltaic solar panels might remain strong solutions for various organizations, individuals, and homesteaders, concentrated solar thermal power solutions might turn out to be better for community-sized needs and larger.

In 2014, United States concentrated solar power generation was around 1.4GW compared to 16GW of photovoltaic, about 8% of our total solar capacity.

We still have decades more to wait for observational data definitively endorsing or rejecting the theory of catastrophic anthropogenic global warming (around +3oC/century). The data thus far doesn’t look good for supporting it, and I think the status quo has been maintained in part by focusing the debate and decisions on it. Intentionally or not, this theory has been a very effective divide and conquer strategy stalling renewable energy innovations a few extra decades.

Had we taken one of my above direct market strategies, perhaps by now the Koch brothers of the world would already find it more financially strategic to invest in renewable technologies than a non-existent climate debate.

Carbon does not need to be considered an alarming pollutant to fund the most obvious existing solutions to epic oil spills and toxic and cancerous pollution more generally. Solutions for peaceful energy independence. Solutions to energy centralization with its significant role in fueling global inequality and the resulting toll on human lives today.

It was 1979 when Jimmy Carter put solar panels atop the White House, decades before any “science was settled,” back when an oil embargo provided a reality check and global cooling was the climate concern. Had we slid the solar hockey stick (Chart 2 above) two decades earlier there would be no need for any climate debate today, and no need (and hopefully no excuse) for current Middle Eastern occupations.

We don’t need any more taxes, domestic or global, to create the market incentives for the renewable energy industries to flourish. We continue to waste this opportunity every year as we spend more billions on studying, analyzing, or investing in future solutions, instead of just implementing the best solutions we have now.

We have sadly failed to make such decisions for decades, but we can start this any time. We can start buying big solar now. As long as we have a huge government spending the money it collects/coerces from us, I would prefer if it was directly skyrocketing solar market demands.


I would prefer this more than popular strategies pushed by the left or right. I think such strategies would meet more needs of everyone, except the top-tier global power consolidators. Had we taken such a strategy 20 years ago, perhaps we would be frustrated with big solar by now, but the side-effects would include a much more awesome-per-capita. Everyone under team sun should be winning much more than we currently are.

Might we have >95% certainty that reallocating preexisting taxes directly for gigawatts of solar technologies would provide profound expansions of the still fledgling solar industry?

Not just over many decades, but this year?

This hypothetical has remained well within the popular statist paradigm which I also hope we can outgrow. This is discussed more in the final essay, but solar energy independence would simultaneously trend towards both national and individual independence with a less centralized resilience, anti-fragility. Stefan Molyneux’s video provides another interesting post-partisan solution.